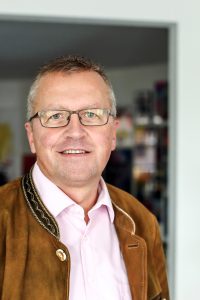 After eleven years with the judiciary, Simianer decided to move into the private sector. There he was initially active as a commercial employee for several years before founding his own company. Within a few years, the consultancy grew to over 40 employees.

While working as a managing director, he earned a part-time degree in business administration and business informatics. In addition, he crowned his academic career with a Master of Arts (M. A.) degree.

Simianer has been involved with natural medicine on and off since 1996. This field captivated him so much that he eventually graduated from the Heilpraktiker Akademie. In the meantime, Udo Simianer has focused his main occupation on hair analysis in humans and especially on horses (equine psychology). With his team he supports veterinarians, physiotherapists, osteopaths, grooms – basically all professionals including trainers and owners of horses.

In collaboration with a laboratory, he has homeopathic remedies produced to get a grip on various illnesses and psychological ailments.